He wrote CARRIE…you should be obsessed with him. (Just kidding! I can admit he’s an acquired taste…)

Welcome. If you’re visiting WILDERNESS, chances are that you like horror. By that, I don’t mean that you’re necessarily a fanatic (though many of you may be). It could be that you just have a fascination with ghost stories. Or an addiction to zombies. Or perhaps a healthy obsession with Stephen King.

However, as you know, you could adore any one of the subjects above but scrupulously avoid other kinds of horror. Not everyone enjoys seeing every single horror movie out there. Some people want only the best of the best, high-quality and artistic and chilling (and should see Lars von Trier’s Antichrist, the second in his Depression Trilogy). Some people hate bad horror movies (like the critics!) and some people prefer them for their camp value (and might enjoy ’80s classic Sleepaway Camp). Some people like only certain horror motifs—just creature features or revenge films, for example. No matter what, there’s a horror flick out there for everyone. I’m serious. You gotta watch this one. (Unless you have literally any triggers. Then, DO NOT. You’ve been warned.) (Antichrist, 2009.)

And this one for fans of camp and slashers. (Sleepaway Camp, 1983.)

There’s where I come in. My name’s Katy and I’m a writer. Horror is perhaps my greatest joy in life. One of my OTHER greatest joys: sharing my recommendations with others. And, to my delight, my friends ask! A lot! It’s an honor, 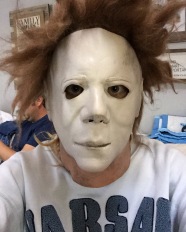 That’s me. (Seriously. I mean, behind Michael Myers’ face, but nonetheless.)

but it’s not because I’m particularly sophisticated in my assessments…it’s because I watch, read, and study a lot of horror. Like. A lot, a lot. That’s why I’m here, in short—to let you know what’s good, what’s great, and what’s downright awful, no matter which you prefer. Because, while you want to see films or read books that are good (whatever that means to you), fit with your interests, and DON’T include any harmful triggers, I’m more than happy to watch them all. And report back with your best options.

So: Don’t bother with skimming synopses for potential triggers—and risking spoilers!—or sitting through bad movies if it’s dragging you down. Instead, enjoy WILDERNESS…I’ll venture in, return, and then escort you to the heart of what you love the most.

As you can see, the site is organized in a way that allows you to browse by category (see below), era (the decade of the film or book’s release), any of five sets of ratings (quality, suspense, horror, gore, and terror—see below), and the medium: film, book, or TV show. Here’s the rundown of my assessment system, devised to be maximally helpful to occasional watchers and buffs alike:

Since not everyone likes every type of horror, I’m categorizing the films, TV shows, and books I write about into these categories of cinematic horror (which will apply to all mediums of horror, but were designed for cinema, which is why the examples listed are films). (This list was developed using Brigid Cherry’s Routledge Film Guidebook to Horror, which I highly recommend for fellow aficionados):

Gothic:
Seems general, but think of it as films including classic tales of horror—adaptations of horror with familiar monsters from legends, folk tales, classic literature, etc.
i.e. DRACULA; THE MUMMY; MASQUE OF THE RED DEATH; INTERVIEW WITH THE VAMPIRE

Occult:
Films involving the supernatural, ghosts, the paranormal…these films include motifs like witchcraft, Satan, and spirits (the uncanny). (These are my favorite, second only to the beloved slasher.)
i.e. ROSEMARY’S BABY; THE EXORCIST; THE BLAIR WITCH PROJECT; THE AMITYVILLE HORROR

Psychological Horror:
Films that explore disturbed psychology—serial killers, deranged, criminals and the like. They’re distinguished from slashers in that they focus on the mind of the monster over the monster’s actions.
i.e. PSYCHO; REPULSION; CARRIE; THE SILENCE OF THE LAMB

Who wouldn’t love this guy? Well…maybe that guy. (Jason Voorhees in FRIDAY THE 13TH PART III, 1982.)

Ah, yes. The cream of the crop. (Okay, I’m biased. But, seriously…have you seen HALLOWEEN??) So, these films feature a group of young people (often teenagers) who are menaced by a stalker. These films tend to take place in domestic spaces, chiefly the suburbs and feature The Final Girl (my pet subject of study, which I’ll post about in-depth later), who manages to fend off her attacker and survive until the film’s end.
i.e. HALLOWEEN; FRIDAY THE 13TH, THE TEXAS CHAIN SAW MASSACRE; SCREAM (and so many, many more)

Gore:
If you’re not a diehard fan, chances are you don’t enjoy these films, which heavily feature graphic body horror. Gore is focused on abjection (the disgust we feel toward our own bodies and bodily processes). These films often feature mutilation, disease, zombies, cannibalism, or S/M.
i.e. THE FLY (or literally anything by David Cronenberg); THE THING; EVIL DEAD; HELLRAISER

Exploitation:
If you thought gore was bad, exploitation cinema is worse. These films are only for the most devoted horror fans, who are willing to cringe through anything for the sake of a good scare. They deal in the extremely taboo—torture, rape, Holocaust imagery, execution…you name it. (Note: These films will be carefully trigger-warned, as will all films/TV shows/books covered on the blog.)
i.e. I SPIT ON YOUR GRAVE; HOSTEL; SAW; IRREVERSIBLE

Considering the last two categories in particular—but for everything discussed and reviewed—I will provide trigger warnings for the following:

I will also include anything less general that strikes me as potentially triggering on IMDb’s content guide, which I reference. Readers: please don’t hesitate to contact me with suggestions for additional trigger warnings.

My rating system will be five-fold. I rate films this way cognitively, because these are five things that primarily interest me in horror. Ratings will be out of five stars.

Happy reading—and thank you for making all of my enthusiasm worth it by reading, commenting, and enjoying horror the way I do.