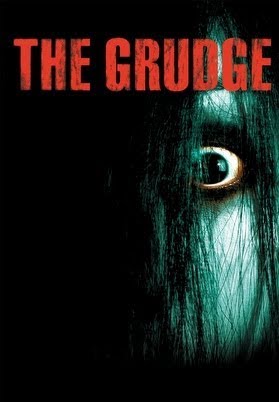 When it comes to contemporary classics, THE GRUDGE is a perennial favorite. The telltale crooooooooooak of Kayako as she slowly and jerkily makes her way down the stairs was a significant part of my childhood, delightedly uttered to scare the wimpy. Although she isn’t the first to come to mind when one considers horror’s most famous faces, distant from the notoriety of the Michaels and Jasons of all-American slashers, the monster in this American reboot of Japanese hit JU-ON: THE GRUDGE (2002) is no less an icon.

In case you’re sufficiently older or younger than I am to the point that THE GRUDGE phenomenon missed you, here’s the skinny:

A young nurse, Karen (Sarah Michelle Gellar, the period’s quintessential scream queen) travels overseas with her boyfriend (Jason Behr) to study abroad in Tokyo. Between studying and staring dreamily into said boyfriend’s eyes, she manages to land a substitute in-home nursing role for an older American woman, Emma Williams (Grace Zabriskie, who, it must be said, bears an unsettling resemblance to the emaciated Ellen Burstyn of REQUIEM FOR A DREAM a few years prior in 2000). Karen is surprised to find that Emma is almost always silent, tight-lipped and all eyes staring straight ahead. Emma’s reticence is only the first surprise in store . . . unfortunately, poor Karen is not informed in advance of the house’s two other residents, Kayako (Takako Fuji, the actress who portrayed the same character in the Japanese original) and her son, Toshio (Yuya Ozeki, also from the original portrayal) . . . unwelcome and undead.

The basis of THE GRUDGE is the idea, originating in Japanese folklore, that a powerful event leaves an emotional stain on the physical setting, often in the form of a supernatural entity, as in this case. (Image courtesy of Takashi Shimizu and Hideo Yamamoto.)

END_OF_DOCUMENT_TOKEN_TO_BE_REPLACED

TRIGGER WARNING: THIS REVIEW MAKES MENTION OF THE HOLOCAUST (AND NAZI IDEOLOGY), BODY HORROR, AND TORTURE. IMAGES INCLUDE BLOOD. (As always, see this post’s tags for trigger warnings for the film itself.)

What is it about the American tourist that has inspired the grisliest in gore? From the ignominious boy-men of HOSTEL (2005) to the (at least mildly) well-meaning student activists of THE GREEN INFERNO (2013), doe-eyed Americans have a tendency to run into grave misfortune abroad (or Eli Roth has a bit of a complex). Unless you’ve been living under a rock for the past seven years, I’m sure you’ve heard of THE HUMAN CENTIPEDE (the original installment is subtitled FIRST SEQUENCE; subsequent installments include FULL SEQUENCE [2011] and FINAL SEQUENCE [2015]) (2009). While the HOSTEL franchise remains my favorite incarnation of the travel nightmare, THE HUMAN CENTIPEDE wins most horrible in my book.

END_OF_DOCUMENT_TOKEN_TO_BE_REPLACED

I don’t know about you, but I’m chomping at the bit to check out these creepy pics, all perfectly suited to add to the site’s “Horror Documentary” category. If you liked CROPSEY, chances are these are right up your alley. I’ve seen CHILD OF RAGE, too … but was unsure whether it qualified as horror, per se. Disturbing, it was. What makes a true-life tale “horror” for you? What’s your favorite “horror” documentary?

TRIGGER WARNING: THIS REVIEW MAKES MENTION OF BLOOD, THE DEATH OF AN UNBORN CHILD (FULL-TERM), AND A GRAPHIC DEATH BY GUNSHOT. IMAGES CONTAIN BLOOD. (As always, see this post’s tags for trigger warnings for the film itself.)

By the time Christmas Eve rolls around, photographer and young wife Sarah (Alysson Paradis) has lost everything—well, almost everything. In a grisly car crash four months previously, her husband, Matthieu died, and she and their unborn child barely escaped death themselves. Bitter, devastated Sarah insists on spending Christmas Eve alone, far from the celebrations that her mother, Louise, and her employer—and close friend—Jean-Pierre (François-Régis Marchasson), are hosting. However, not even antisocial Sarah can escape company this Christmas Eve … or the perverse invasion that follows—of her privacy, her home, her body.

INSIDE (Á L’INTÉRIEUR), after a brief portrayal of the scene of the crash and the opening credits, begins not only on Christmas Eve, but on the night before Sarah will give birth. (The obstetrician tells her that if she does not go into labor naturally, they will induce it on Christmas morning.) Sarah is utterly silent during her obstetric exam early Christmas Eve, plainly going through the motions. Her misery is reflected through her actions: in the park, waiting to meet Jean-Pierre, she is moved by the bittersweet sight of a family of three  and, on an impulse, photographs them. Her mood is also reflected in the mise-en-scène—she lives in a gorgeous, gothic Parisian home, in a neighborhood that is noticeably deserted, as dark and moody as Sarah. (When she is speaking to a police officer later in the film, he remarks: “Pretty quiet around here for Christmas Eve,” and she replies: “That’s the kind of neighborhood this is.”) Her black cat roams the house, and his plaintive meow prophesies danger. One is almost unsurprised when things take a turn for the worse.

END_OF_DOCUMENT_TOKEN_TO_BE_REPLACED

TRIGGER WARNING: THIS REVIEW MAKES MENTION OF CHILD MOLESTATION AND SEXUAL ASSAULT. IMAGES CONTAIN BLOOD. (As always, see this post’s tags for trigger warnings for the film itself.)

SPOILER ALERT: THE DEATHS OF SOME CHARACTERS ARE REVEALED IN THIS REVIEW.

There’s something about eighties horror that stands alone. Is it the canned electronic music that is intended to portend action and build suspense? Is it the dated special effects? The ridiculous costuming? It’s all of this—which can be summed up as a total and complete lack of subtlety, sometimes endearing, often cringe-worthy. A NIGHTMARE ON ELM STREET (1984) falls somewhere between these two extremes—it’s no masterpiece, but it’s a riotous ride, one that has managed to capture the hearts and imaginations of at least three decades of horror fans.

When friends Tina (Amanda Wyss) and Nancy (Heather Langenkamp) confer on their walk to school, both remark that they’ve been having nightmares … nightmares that are impossible to dismiss once they realize that they have both dreamt of the same hideous figure, a man covered in severe burns, wearing a green and red sweater and a hat, with handmade gloves that have razor blades in place of fingers. That very night, when Nancy—and her boyfriend, Glen (Johnny Depp), as well as Tina’s beau, Rod (Jsu Garcia)—sleep over at Tina’s to allay her fear of the nightmares, she is killed by an unseen force. Rod is accused of her murder and jailed, but Nancy knows the truth … and won’t rest until she faces the mysterious figure in her dreams during her waking hours.